[blockquote align=”none” author=”Tabarani in al-Kabir”]Publicize the marriage and announce it.” [/blockquote]

A marriage is commonly publicized during the wedding, which entails many acts of celebration, such as singing and rejoicing among the women, and a wedding banquet called the walimah. Now we will discuss these in detail. 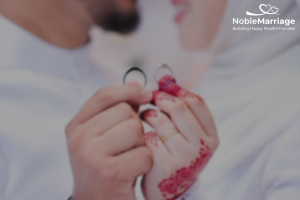 We know that music is prohibited in Islam. This rule is supported by genuine texts and by the consensus of the early ‘ulama’ of Islam, including the Four Imams. Anas reported that the Prophet Muhammad (Sallallahu allayhi wa sallam) said :

[blockquote align=”none” author=”Albani in Sahih ul-Jami”]Some people of this Ummah will be punished by earth-collapse, stoning, and metamorphosis. This will happen when they drink khamr, keep female singers, and play on musical instruments. [/blockquote]

The walimah (or wedding feast) is a meal offered by the husband to the friends and family after consummation of the marriage. The walimah is wujib (obligatory) upon the husband. Buraydah Bin al-Hasib reported that when Ali (Karam Allahu Wajhahu), married Fatimah, Allah’s Messenger (Sallallahu allayhi wa sallam) said:

[blockquote align=”none” author=”Albani in Sahih ul-Jami’ no. 2419″]Indeed a wedding (or a bridegroom) must have a walimah.” [/blockquote]

Find Your Life Partner
with NobleMarriage